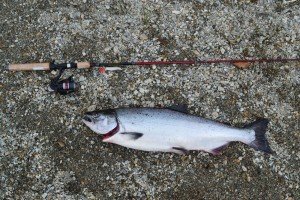 WEST COAST’S AWESOME AUTUMN ANGLING
Calm fine autumn days have been providing ideal weather for fishing on the West Coast, with the regions lakes and rivers in excellent condition.

With a lower number of anglers out, those trout fishing have had plenty of fishable water all to themselves. While carrying out the annual mallard and grey duck counts recently, I’ve seen trout feeding aggressively from the surface in the morning and evening on a couple of the lakes.

Although temperatures are lowering overnight there might still be the odd bit of dry fly fishing available here and there. The light winds would certainly help with casting a fly.

The salmon season is all but finished for another year with the Taramakau River and Lake Mapourika having provided the best opportunities for those targeting salmon.

The Hokitika River had a couple of flurries as fish passed through early on. A good number of fish have also been caught from other rivers in South Westland.

LOTS OF OPTIONS FOR WINTER FISHING
The West Coast Region has plenty of options for winter fishing. Be sure to check your regulation booklet, but a number of the Coasts rivers and lakes remain open throughout the year.

As insect activity lessens there will be less surface activity and many anglers will being using wet flies or spinning tackle, especially when targeting fish lower down in the estuarine areas. Spin fishing enables a large amount of water to be covered quickly, which helps as river flows tend to increase from now on.

Bait fishing techniques are also permitted in many waters. This method is ideal if you don’t do a lot of fishing yourself but have young kids on their school holidays that want to catch a fish or two.

Often it’s a good way to get a couple of fish in the net and keep young anglers keen. Lake shores such as Brunner are ideal for this. The shore is relatively safe for children in comparison to the edge of a swift river and this lake in particular holds good numbers of brown trout.

These particular releases were made into the Taramakau River, Hokitika River, Lake Ianthe and Lake Mapourika. Thanks to local sponsorship from Griffen and Smith Mitre 10, The South Westland Lions, The Paringa Salmon Farm and Trust Power. A large number of salmon have been released to enhance the wild populations, along with salmon provided for the junior fishing day late last year, and also brown trout released into Lake Kaniere.

With all fish having been released for this season, the focus will now go towards monitoring the numbers of spawning salmon in specific streams along the Coast where salmon have been known to spawn historically. 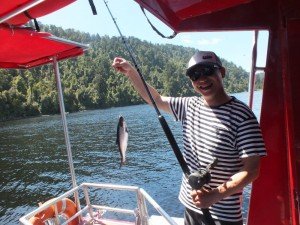 There is a long dataset of salmon numbers returning into certain streams to spawn. While out counting the returning salmon, any spent fish found post spawning will have their otoliths removed for analysis.

Results from these will provide details of the salmon’s life history, for example the waterways they originated from, the time they spent in freshwater compared to the saltwater environment and we will know if they originated from wild stock or are returning fish from past enhancement releases.

All this information allows West Coast Fish & Game to undertake any enhancement as effectively as possible to increase the number of salmon returning and therefore increase angling opportunities for future seasons. 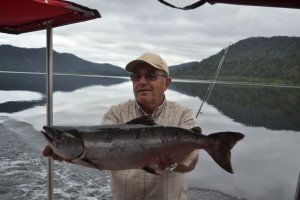 The Trout season is still going all year round so contact us today to book your fishing adventure!