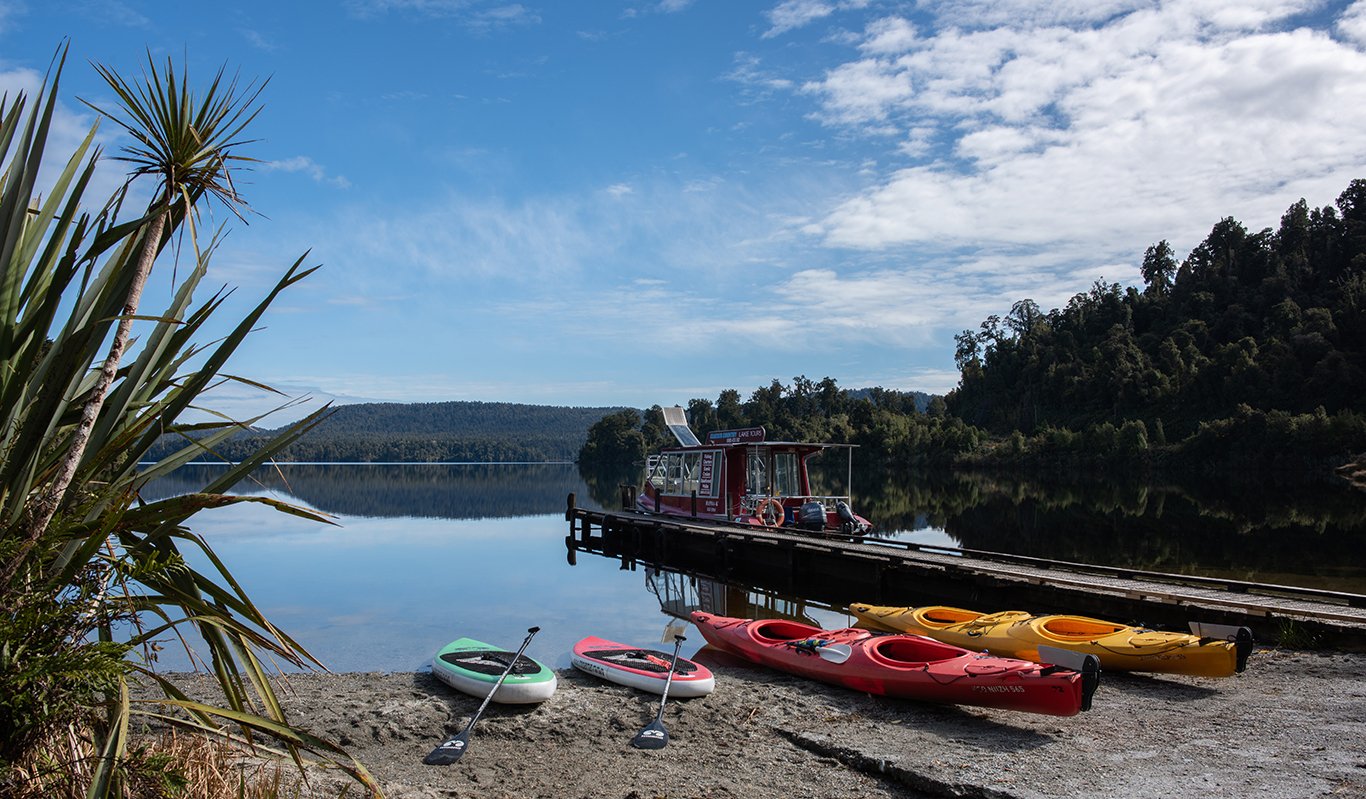 New Zealand’s native forests are incredibly beautiful and diverse.  There’s many unique trees which we see in South Westland which are present all around New Zealand, and one of the most common yet uniquely kiwi trees we see is the NZ Cabbage Tree!

Believe it or not, the cabbage tree is a type of tree lily!  Their tufted heads of pointed leaves are a familiar sight in New Zealand.  We enjoy these trees daily at the Lake Mapourika Jetty where our tours kayak and boat tours depart.

The official term for the Cabbage tree is: Cordyline australis or ti kouka.   It is actually the most common of New Zealand’s native trees, and may be regarded as perhaps the most iconic.  We’ve always thought it looked like the iconic trees in the much loved Dr. Suess books!  These trees grow all over New Zealand, rising from sea level up to 760 m.

Here’s a quote from Philip Simpson which sums it up nicely:

“In primeval New Zealand cabbage trees occupied a range of habitats, anywhere open, moist, fertile and warm enough for them to establish and mature: with forest; around the rocky coast; in lowland swamps, around the lakes and along the lower rivers; and perched on isolated rocks. Approaching the land from the sea would have reminded a Polynesian traveler of home, and for a European traveler, conjured up images of the tropical Pacific”. 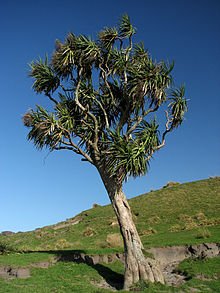 That means, you will encounter the up to 20 m tall tree with its stout trunk and the sword-like leaves that can measure up to 1 m almost everywhere you go, but probably not as much in Fiordland. They appear in a few different shapes as with a widely branched trunk, a tall and relatively unbranched stem, or even no stem at all as it happens for the dwarf cabbage tree that grows up to 1 m in height. 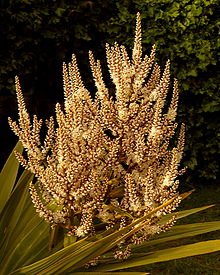 Until it is 6 to 10 years old a cabbage tree will not flower.  Therefore they have slender unbranched stems.  In spring and early 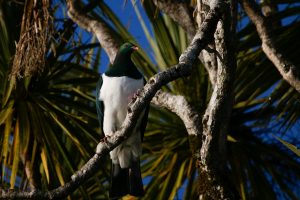 summer, sweetly perfumed flowers are produced in large dense panicles that are 0.6 to 1 m long.  They bear 5,000 to 10,000 creamy-white flowers and produce up to 40,000 seeds. After its first flowering the cabbage tree will start to branch.  From this point onwards, each successive flowering causes further branching.

The berries, white or blueish fruits, are about 7 mm in diameter and eagerly eaten by birds, including the bellbird and New Zealand pigeon.

The Maori people used the pith of the trunk, as well as its fleshy root and the young leaf bud as a rich food source.  Since Cook’s voyage to New Zealand, the cabbage tree’s edible leaf bud was also used by Europeans.  They are very high in sugar and the fleshy rhizomes were steam cooked in earth ovens to produce what they called: kauru.  Kauru is a carbohydrate-rich food, that was used as a sweetener.  The growing tips of the leaves were eaten raw or cooked as a vegetable.

Cabbage trees served not just as a food source but were also used in spiritual, medicinal and practical manner. For instance the tough fiber, once extracted from the leaves, was highly valued for its strength and durability (especially in seawater).  Believe it or not, it is stronger than flax fiber!   Therefore it was used for making anchor ropes, fishing lines, cooking mats, baskets, sandals, leggings and ropes.  The ropes were even used to create swings (Morere) which Maori children played with.  The Cabbage tree was also boiled up or pounded into a paste and used to treat illnesses or injuries. 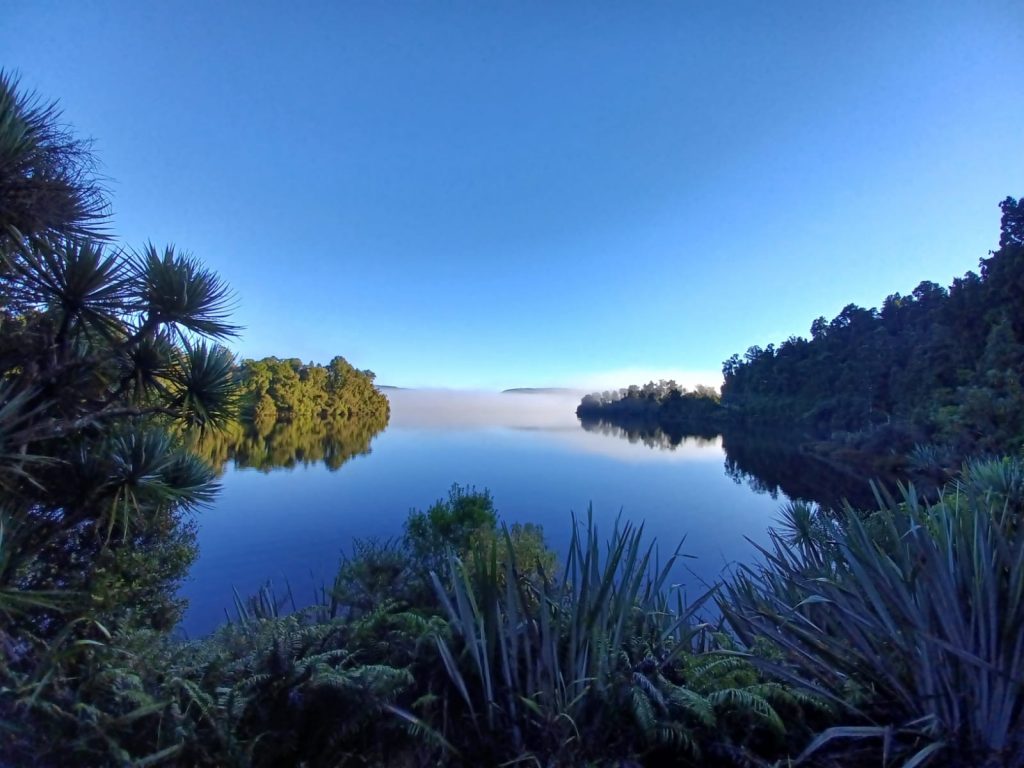 The Cabbage Trees at the Lake Mapourika Lookout frame this picture beautifully.

The Cabbage and Forest Fires

The cabbage tree is one of the few New Zealand forest trees that can recover from fire.  Its ability to recover is due to the protected rhizomes under the ground, which spread quite deep and are almost similar to a carrot underground.  If fire burns the tree, it can renew its trunk from the rhizome’s buds. As an advantage to other trees, it can regenerate itself quickly when compared with other native tree species.

The leaves of the cabbage tree contain oils which make them burn easily.  However it’s these same oils which allow for easier seed germination on the ground as when a Cabbage tree leaf falls the oils slow the decay of the leaves.  As the tree sheds it’s leaves it creates a mat on the ground which covers and protects the germinating seeds below.  Eventually the leaves will break down and will form a fertile soil around the tree.  The seeds of the cabbage tree also store oil, which means they remain viable for several years and can germinate in great numbers after a bush fire clears up. 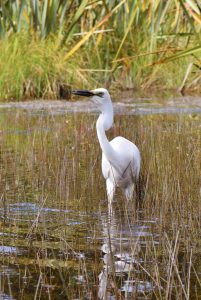 Want to learn more about the cabbage tree and its history? Come on a Scenic Boat Cruise or join a guided Kayak Trip!  Our local and knowledgeable guides have much more to tell you about New Zealand’s unique landscape and the West Coast Native Rainforest!   You might even spot a Wood Pigeon (Kereru) feeding on flowers in the spring – or a famous White Heron (Kotuku) feeding on the shoreline for eels!