Kahikatea (Dacrycarpus dacrydioides) – New Zealand’s by far tallest forest tree – once grew all over New Zealand’s swampy lowlands. Standing close to each other the over 60 m high trees entwined their buttressed roots for support in the unstable swampy ground being far from a solitary tree. It is suspected, that it is for this reason, that

the Kahikatea has evolved with such a tall, straight trunk with no lower branches.

In autumn the Kahikatea is abundant with its red berries. Numerous birds, especially New Zealand pigeons, tui and kaka, can be spotted chattering noisily in its canopy during this time. These berries – called koroi – were also a valued food source for Maori, who would climb the smooth branch-less trunk very skilfully to harvest them. Kahikatea trees however do not necessarily fruit well every year, but when they do, the fruits will colour the trees so that it appears quite reddish.

When the first Europeans encountered the giants they had great hopes for it and called it “white pine”, even if it doesn’t resemble pines at all, reflecting their confidence in its suitability as timber. So they started extensive logging, but would soon discover, that the Kahikatea, while it’s undoubtedly tall an straight, is way to soft to suit for naval or building applications. In addition it was readily attacked by the larvae of borer beetles. But even after this discovery the new settlers would not stop to remove the trees, as the lowlands on which they grow were found to be very fertile soil and therefore made into farmlands for the fast growing dairy industry.

These early settlers were very unaware of the fact, that the Kahikatea is an ancient survivor from the Jurassic period, which was evidenced by geologists who discovered its pollen and leaves in Jurassic rocks, some 160-180 million years old. Neither birds no flowering plants had even evolved then. The fruits of the Kahikatea were probably feasted on by flying dinosaurs (pterodactyls) like the pterosaurs. 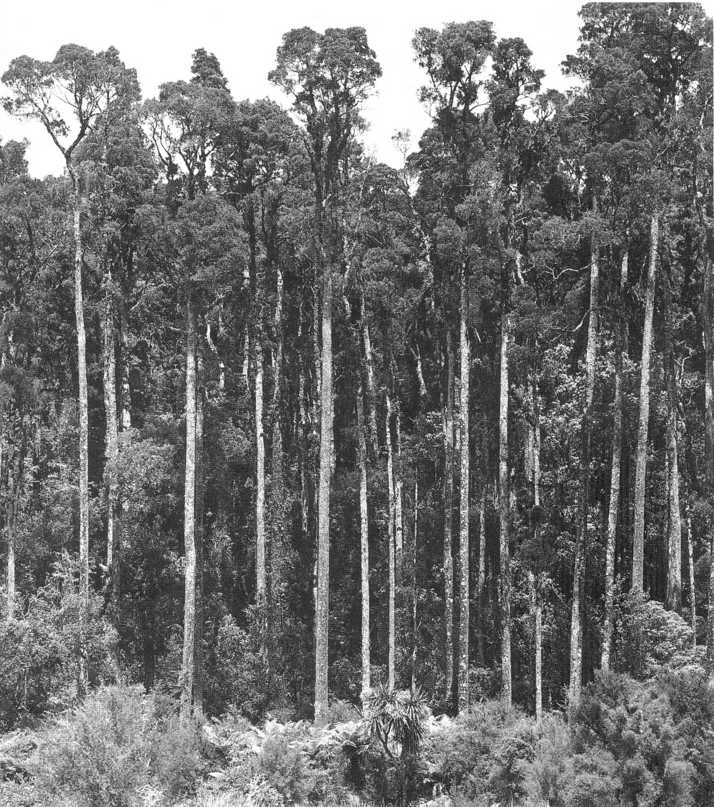 In 1882, when refrigerated shipping was developed, the destruction of the Kahikatea boomed even more, as the soft, pale and odorless wood was perfect for butter and cheese storage, for it didn’t taint the products. Myriad of boxes were made to satisfy the big demand for cheese and butter in Great Britain made by New Zealand’s newly created dairy farms. For years Kahikatea trees would be harvested in big amounts. In the 8 years between 1909 and 1917 alone, the remains of Kahikatea were reduced by 63%.

Today there are only a few places where Kahikatea can still be seen in their original natural environment. Primarily in South Westland you can still gaze at up to 900 years old Kahikatea trees. Lake Mapourika being one of these spots.

Don’t miss out on your chance to feel the Jurassic spirit and come for a trip on our boat. 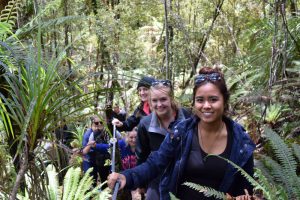 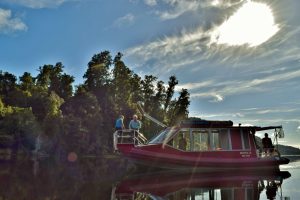 Scenic Cruises and Rainforest Walks allow a personal encounter with the Jurassic giants.