Left behind by the mighty Franz Josef Glacier…

Left behind by the mighty Franz Josef Glacier…

Lake Mapourika sits in the Franz Josef Glacier Valley, sandwiched between the dramatic Southern Alps and the Tasman Sea. It’s a very deep lake (sitting about 80 metres deep!) and the bottom of the Lake sits level with the sea about 15 kms to the West. The lake is unusually calm and mirrored every morning, but leaves the question… how did it get here?

The Franz Josef Glacier, along with the several hundreds of other glaciers found in the Westland National Park, used to extend all the way to the Tasman Sea. This was a very long time ago during the last glacial period, roughly 20-18,000 years ago. It’s hard to imagine now, but all our surroundings here in the park used to sit beneath the ice. Before there was forestation, lakes and hills, it was all covered by dense glaciers.

As the climate began to warm up, the glaciers started to slowly retreat and change. The effects of a glacier on the landscape are huge, and can still be seen today in the dramatic landscape of the Westland National Park. As a glacier advances it carves it’s way down – shaping rocks, removing flora and pushing large rocks and boulders at the front. Rocks and boulders within the glacier can create marks on the bedrock which are known as ‘striations’. Much of the bedrock found in the Franz Josef Glacier Valley bear these telltale signs.

The rocks known as ‘morraine’ which are moved around with the changing glacier can be pushed and deposited by advance periods and then left behind by the subsequent retreat periods. The piles of glacial morraine were left here thousands of years ago and form many of the steep hills we see around Lake Mapourika.

As the Franz Josef Glacier retreated from the ocean, about 14,000 years ago, it left behind a large block of glacial ice which became disconnected from the large trunk of the glacier. Eventually this ice melted, and left behind a lake surrounded by steep vertical walls of glacial morraine. These types of lake are what we call ‘kettle’ lakes and are fairly common on the West Coast.

Lake Mapourika now sits calm and unruffled, surrounded by dense ancient rainforest which has grown up from the bare surfaces of rock left there thousands of years ago. The rainforest around the Lake is unique and largely unmodified. It gives us a glimpse into Jurrassic-like forest, but this is a story for another time… 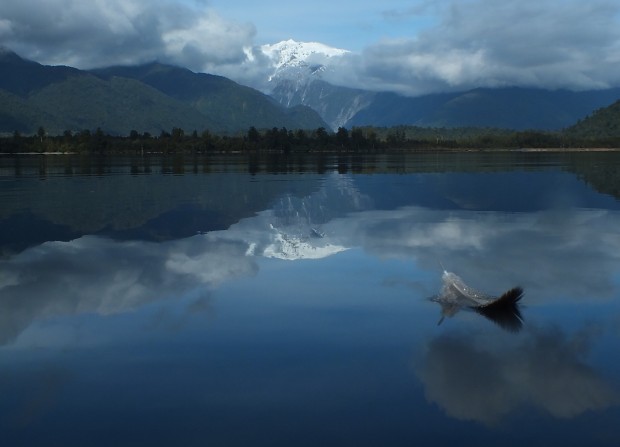 Feather caught reflecting on the Lake during a morning kayak tour