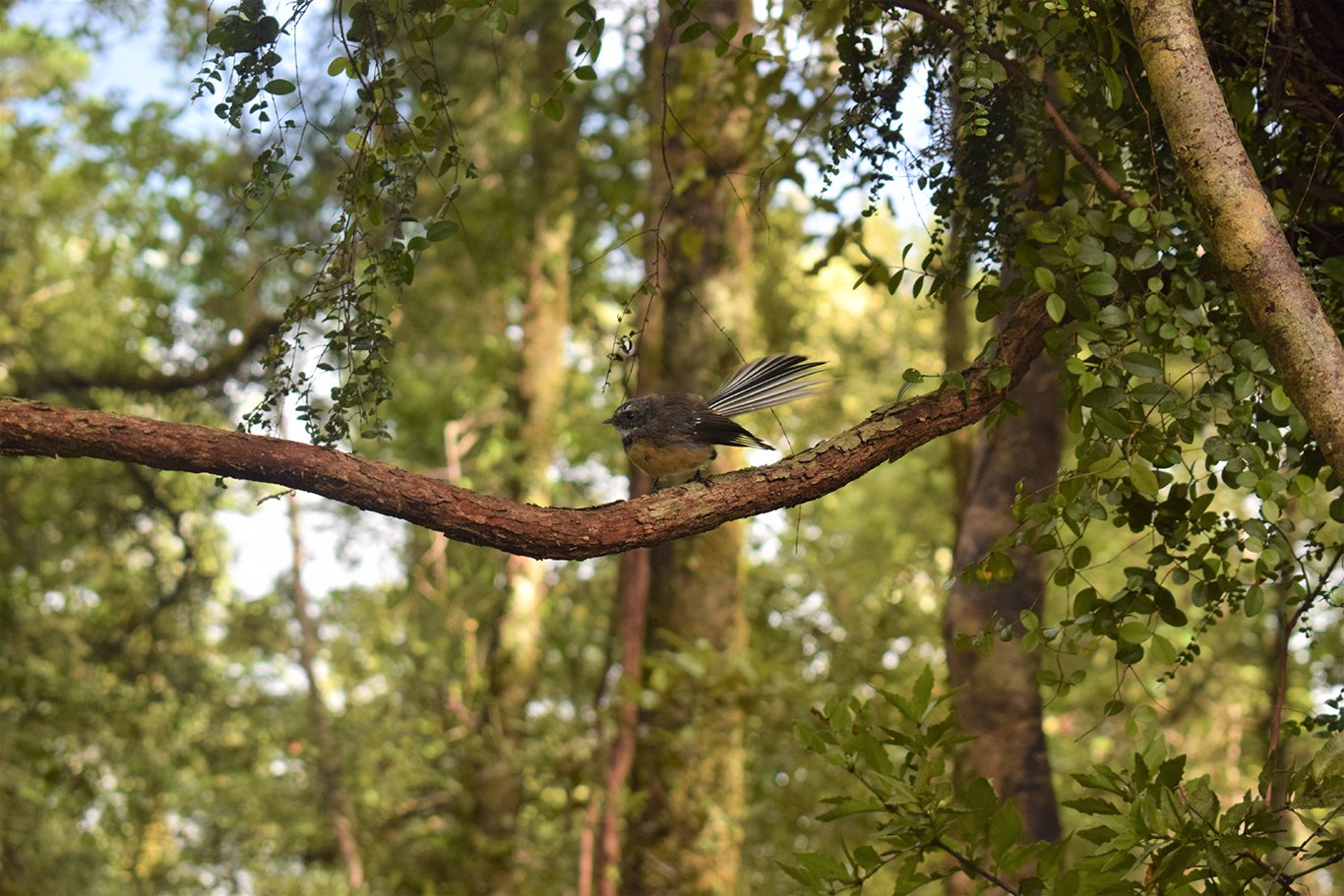 If you’ve ever been a walk through New Zealand’s native rainforest you have surely spotted a Fantail!  Fantails are commonly spotted as they follow you along a trail.  Although it may seem purely friendly – you’re actually stirring up their food!  Fantails follow humans along walking tracks because we disturb the ground and stir up the flies and other small insects for the Fantails to snack on.

The Fantail’s name comes from its fan-like tail and these birds can be very playful and friendly.  The Fantail is a dark grey or grey-brown with a yellow/orange belly, with a white throat and white markings over the eyes.  It grows to 16 cm in length- half of which is the tail!   As the name implies, the tail is often seen fanned out.  They use their large fanned tails to turn quickly in the air.  Their agility helps them to catch insects mid-air to feed on.  Thus they are rarely seen feeding on the ground. 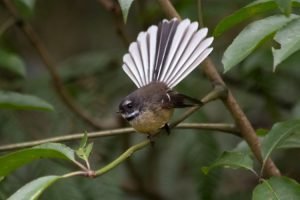 Fantails are one of the few native bird species that have coped well with the extensive conversion of lowland native forest into farmland. The New Zealand Fantail is widespread in population and quite common.  Widespread population of Fantails is due to their utilization of habitats, including both native and exotic forests as well as shrub-land.

In Maori the Fantail has 20-30 different names including the most common Piwakawaka and Tiwakawaka. The Maori people consider the appearance of a Fantail to be associated with death. For instance, when a Fantail is seen inside a house it is considered to be bad luck and the news of death is imminent.

“In Māori mythology, the fantail was responsible for the presence of death in the world. Maui, thinking he could eradicate death by successfully passing through the goddess of death, Hine-nui-te-po, tried to enter the goddess’s sleeping body through the pathway of birth. The fantail, warned by Maui to be quiet, began laughing and woke Hine-nuite-po, who was so angry that she promptly killed Maui.”  [Sourced from Department Of Conservation – Native Birds – Fantail/piwakawaka: https://www.doc.govt.nz/nature/native-animals/birds/birds-a-z/fantail-piwakawaka/]

Fantail chicks are hungry!  Once hatched, the chicks demand to be fed every 10 minutes.  Which means they’re fed about 100 times per day on average! 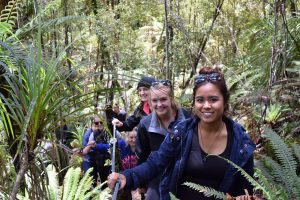 A group shot from our exclusive rainforest trail on Lake Mapourika. Come and spot a fantail with us!

Franz Josef Wilderness Tours spot Fantails on all of our tours!  We especially enjoy spotting them as they follow us through the rainforest on our exclusive track through the Okarito Kiwi Sanctuary.  Our knowledgeable team of guides have become quite talented at snapping a picture of the birds. Check out some of their awesome snaps on our intstagram or facebook page!