Welcome to these little fellows on Lake Mapourika

Welcome to these little fellows on Lake Mapourika 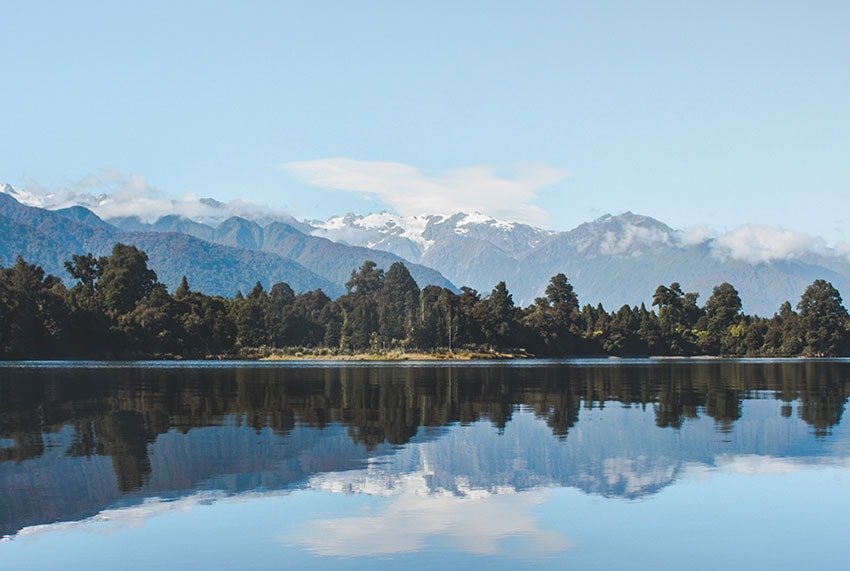 The Black Swans on our lake recently had offspring. 5 little cygnets just hatched a few days ago and another 3 are already exploring Lake Mapourika for a few weeks now. So two happy Black Swan families are paddling their way around the beautiful scenery. And to be perfectly honest, who wouldn’t like to wake up to views like this?!

The Black Swan (Cygnus atratus) is a large waterbird, a species of swan, which breeds mainly in the southeast and southwest regions of Australia. Before the arrival of the Maori in New Zealand, a subspecies of the black swan – the New Zealand Swan (Cygnus sumnerensis) – had developed in the islands, but was apparently hunted to extinction. In 1864 the Black Swan was reintroduced from Australia as an ornamental waterfowl and populations are now common on larger coastal or inland lakes, especially Rotorua Lakes, Lake Wairarapa, Lake Ellesmere and the Chatham Islands. 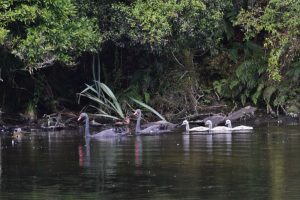 Scientist consider the black swan to be a rather native than exotic species to New Zealand, as they have flown naturally to New Zealand, although the present population appears to be largely descended from deliberate introductions.

The Black Swan utters a musical and far reaching bugle-like sound, called either on the water or in flight, as well as a range of softer crooning notes. It can also whistle, especially when disturbed while breeding and nesting. 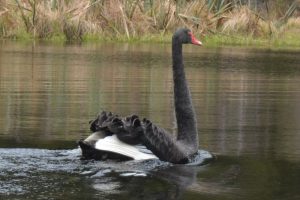 When swimming, Black Swans hold their necks arched or erect and often carry their feathers or wings raised in an aggressive display.

As an almost exclusively herbivorous animal, the diet of the Black Swan is dominated by aquatic and marshland plants with some regional and seasonal variation. The exact composition of their diet varies with water level. In flood situations where normal foods are out of reach Black Swans will feed on pasture plants on shore. They feed in a similar manner to other swans, so when feeding in shallow water they will dip their heads and necks under the water and they are able to keep their heads flat against the bottom while keeping their bodies horizontal. In deeper water the Black Swan up-ends to reach lower.

Like other swans, the Black Swan is largely monogamous and pairing for life (divorce rate about 6%). About a quarter of all Black Swans is estimated to be in homosexual pairings, mostly between males. These would steal nests or form temporary threesomes with females to obtain eggs, driving away the female after she lays the eggs.

Black Swans in the southern hemisphere nest in the wetter winter months from February to September. The nest is essentially a large heap or mound of reeds, grasses and weeds between 1 and 1.5 m in diameter and up to 1 m high in shallow waters or on islands. A nest is reused every year, rebuild or restored as needed with both parents sharing the care of it. 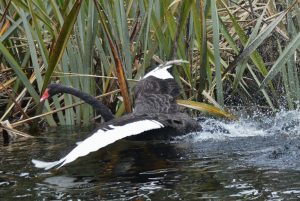 Molting (the annual shedding of feathers) occurs after breeding season. Black Swans shed their white flight feathers and are therefore disabled to fly for about a month. During that time they will usually settle on large open waters for safety.

A typical clutch contains 4 to 8 greenish-white eggs that are incubated for about 35-40 days. The parents would start to incubate after the laying of the last egg in order to synchronize the hatching of the chicks. Prior to the commencement of incubation the parent would just sit on the eggs without actually warming them. Black Swans share the incubation between themselves with the female mainly incubating at night. The change over between incubation periods is marked by ritualized displays between both sexes. Like all swans, the Black Swan will aggressively defend its nest with its wings and beak.

After hatching, the cygnets are tended by the parents for about 9 months until fledgling. Cygnets may ride on their parent’s back for longer trips into deeper water, but Black Swans undertake this behaviour less frequently than other swan species.

We are very happy to have these amazing birds around at our lake and it’s great to see they get along just perfectly with their neighbors (here to see them with a Paradise Duck couple and two Teals): 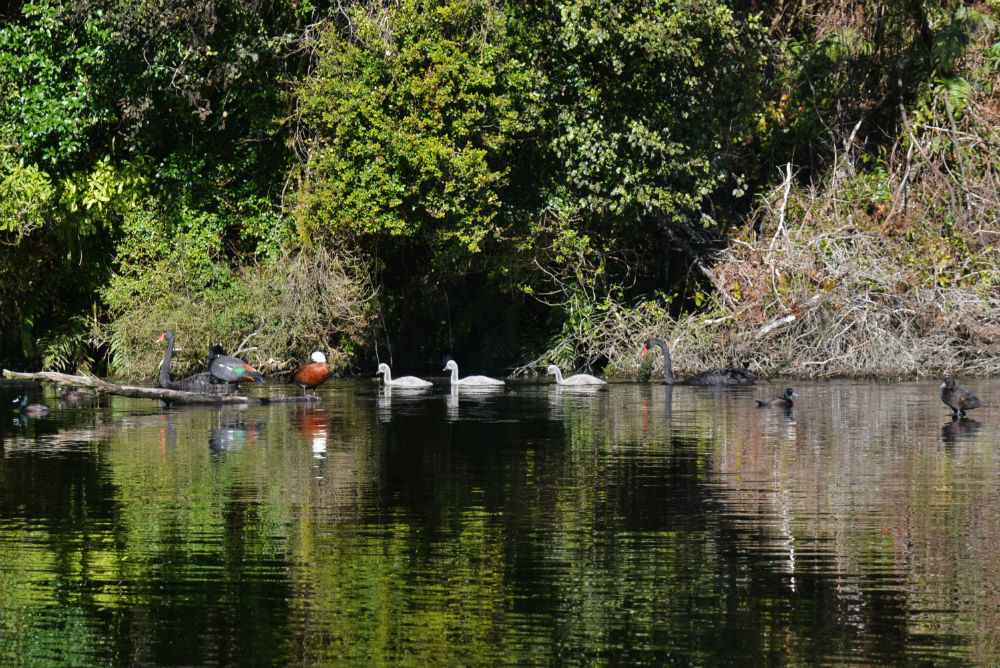 Last but not least a fun fact to remember when encountering Black Swans: They are highly intelligent and remember who has been kind to them, or not…. So keep a respectful distance and smile 🙂

Excited to meet them? Come kayaking with us and explore Lake Mapourika with its happy Black Swan families! 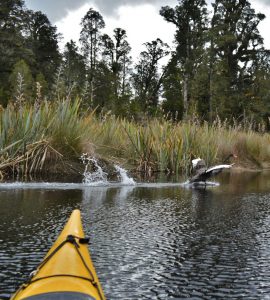